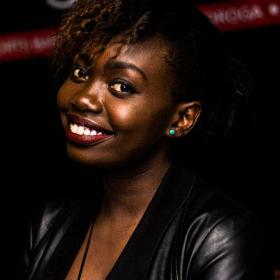 Acey Gracey is a singer and DJ from Nairobi, Kenya.

Grace Was better known as AceyGracey is a singer, songwriter whose musical journey can be traced to her high school days. She started out as a vocalist for Usoni Band in 2015 and later came into the limelight after winning the 'Sitaki 50k' challenge that got her doing a duet of 'Sitaki' with Pascal Tokodi in 2016.
Her debut single 'Nimekutoka' explores the dynamics of relationships and breakups in a soulful ballad that is bound to capture the hearts of music enthusiasts.


She is currently recording and plans to keep releasing tracks as she solidifies her fan base in anticipation for her debut album.


https://soundcloud.com/aceygracey-were
Posted by Kenneth Howard Smith at 8:54 AM